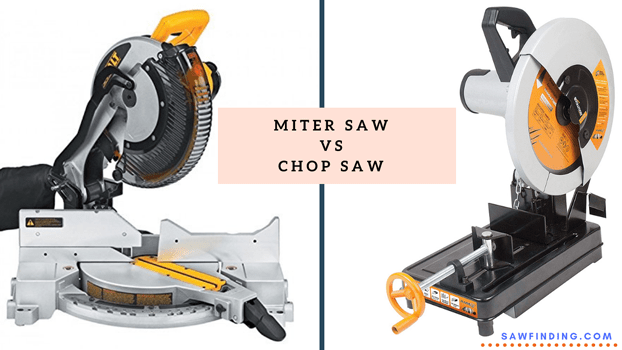 Miter saws and chop saws are essential tools for professional workers such as woodworkers, framers, DIY enthusiasts, etc. Although both machines have the same primary function, there are significant differences between the two.

Both of them use a circular blade and follow a drop-down mechanism to cut materials from top to bottom. But the difference is that chop saws can cut various types of materials like steel, pipe, wood and lot more while miter saws only cut wooden things. Again, chop saws are more powerful and more extensive than the miter saws. They use in commercial or industrial purposes for cutting down the large volume of robust applications. On the contrary, you can’t get the best cutting result without using the miter saws, especially while cutting woods. Here we have described in details about their differences below.

The significant difference between a chop saw and a miter saw is you can rotate a miter saw and make various cuts such as angled cuts, miter cuts, etc. On the contrary, a chop saw enables you to cut straight at a 90-degrees angle. Another significant difference you will notice in these saws is that chop saws tend to be larger and more potent than the miter saws. Generally, they use a minimum of a 14-inch blade to cut robust materials like a sturdy machine, metal equipment, etc. That’s why the chop saw is also known as the predator of power tools to the most woodworkers.

On the other hand, miter saws are considered as the finesse machine because they can help you out by producing perfect, neat, finished cuts on small materials. These tools are suitable for framing, molding, and little piping.

Now we know the noticeable difference between a miter saw and a chop saw is its cutting capacity.  It uses a blade which features teeth to make angle cuts. Besides providing you 90-degree angle cuts as the chop saw, it allows you to create different cuts as well. And so, it is perfect for framing, woodworking, and molding project. But the only drawback of this type of saw is it only cuts woods. However, if you need to do a home improvement project, then a miter saw can be your faithful companion. Generally, miter saws aren’t massive like the chop saws. They tend to be 10 to 12-inch long. So, they are compact and appropriate for use at home. And we recommend you to choose a miter saw that comes in 10-inch because you can comfortably work with that if it comes in a standard measurement.

A chop saw is a powerful machine. It can cut through anything, including metal, rebar, steel, and pipe. And these tools are suitable for welders, fabricators, and workers who work with steel. As they do construction jobs, they need to cut studs, trusses, joists, and rafters. And so, they need a robust machine like the chop saw to get their job done.

Although all chop saws come with standard blades, some manufacturers offer multi-purpose blades. All these blades produce sparks and leave the material hot after the cut is made. So, it is essential to wear safety glass while operating the device. Again, you can use a cold-cut saw which will provide you the same result with little to no sparks.

Most chop saws available in the market today have a standard size of 14-inch. And they are built for commercial usage, which means it will be difficult for someone to install it in their home. And so, we recommend these tools, if you are a professional worker who wants the best potential out of their job.

As you know, the chop saw is a construction tool that can help you while building a house from the ground up. After finishing significant cutting tasks which are related to the construction jobs, you can then use a miter saw to put on the finishing touches. That means you will need both tools to get the best result out of your work.

Some people think that if they have a miter saw or a chop saw, they can easily do their cutting job. And they also believe that all miter saws are chop saws. So, they end up purchasing only a miter saw which can’t be a sign of a professional worker. We need to remember that, although all miter saws work like chop saws, all chop saws aren’t as like as miter saws. They have differences. We hope that now you have a better understanding of the differences between these two types of saws.

Jake Leach, a gardening power tools researcher, resides in USA together with his loved ones. In the childhood he saw his dad to perform gardening staffs in all day long. After Jake was 21, he wished to help his dad by discovering what tools could make the gardening simpler. From then, he is currently performing his research and discovering what tools may be the very best for any job that is gardening. He is now 25 and expert enough to look for the best gardening tools available on the market.